The special character of present day Fair Haven is rooted in its heritage as a small community closely linked to the Navesink River.

Fair Haven is believed to have been seasonally inhabited by native Indians prior to the coming of European settlers in the 1660's, but little is known of those early days. It's recorded history begins in the early 19th century when the Borough was part of then extensive Shrewsbury Township.

The town's first permanent dwelling was built by Jeremiah Chandler in 1816 on the riverbank near the foot of what is now Fair Haven Road. The river provided an economic base for a growing community. By 1850, "Chandler's Dock" had been erected on a site adjacent to the present town dock. Steamboats on the New York-Red Bank run made regular stops. They transported oysters and other river harvest to the city. During the latter years of the 19th and early part of the 20th centuries, boats such as the "Seabird" and "Albertina" (depicted on the Borough seal) continued that trade and brought numerous summer visitors, many of whom were famous vaudevillians. Nearby boarding houses and the old VanTine and Atlantic Hotels catered to this clientele. The vaudevillians organized the Player's Club, whose site now serves as home to the Shrewsbury River Yacht Club. 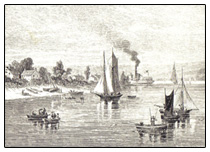 In the 1850's, Charles Williams, a free black person, built his home at the foot of DeNormandie Avenue. The structure is occupied today by his descendants, and is one of the oldest continuously inhabited houses in the Borough.

A free black community had become established in town prior to the Civil War. Fisk Chapel, constructed in 1888, successor to several prior structures, served as the community's church and social center. The building is listed on the National Register of Historic Places, and now is used as a Borough meeting hall.

The mid-19th century witnessed construction of many houses along the road leading to Chandler's Dock. Now called Fair Haven Road, the street was then the heart of town. At different times it has been known as "Clam Shell Road", "VanTine Street", and "Pearl Street". The Hendrickson, Little, and other Fair Haven families were among the first to establish homes on the street. They were later joined, among others, by J.S. Throckmorton, captain of the "Albertina". Contemporaneously, adjoining streets (Clay, DeNormandie, and Gillespie) and adjacent parts of current day River Road were built up. In recognition of the many 19th century structures still found there, this part of town has become popularly known as the "Old Village".

By the late 1800's, development of the Old Village had been largely completed. Later years would witness at least two other periods of major building in town, but throughout the past century, the original Old Village has remained remarkably unchanged, and it retains today a great deal of its 19th century appearance and atmosphere. the Old Village is now contained in an Historic District.

Fair Haven remained a part of Shrewsbury Township until March 28, 1912, when it incorporated as a borough by Act of the New Jersey State Legislature.